From waste to value: Using solid waste for good sanitation 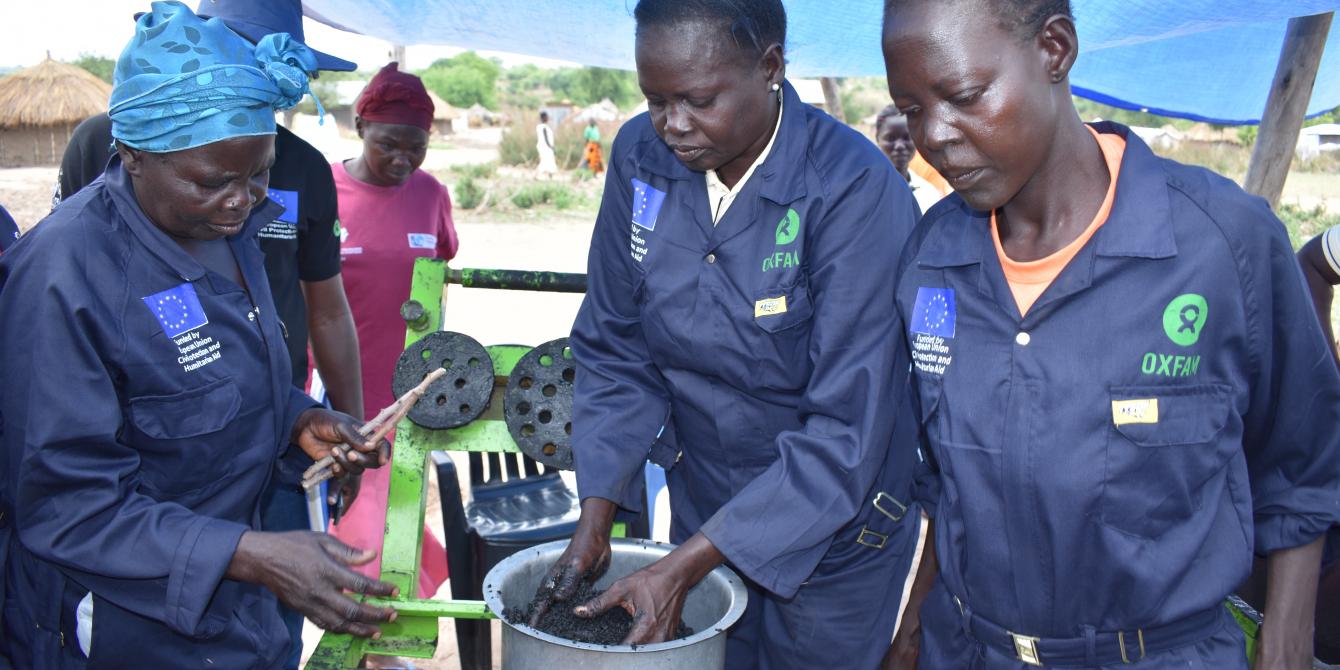 Members of Loketa's women's group in Uganda in the briquette-making process. Credit Oxfam

Communities there are now making briquettes from solid waste.

The challenge of good hygiene in a crisis

In any densely populated area, good sanitation is bound to be a challenge. More so in a refugee settlement where essential facilities are often inadequate considering a rapid influx of people and massive populations. In 2016, when thousands of families from South Sudan flocked into refugee camps in the north of Uganda fleeing war and hunger in their country, it was a race against time to set up systems and structures that would help prevent disease outbreaks.

“At the onset of influx, provision of safe water to the People of Concern was a big challenge as there were no facilities within the settlement. Oxfam with other partners started water trucking as they looked to secure funding from different donors so the water was limited and hygiene practice was a challenge. Sanitation facilities were temporary with limited privacy with one latrine stance serving approximately 50 people. Households were being supported to set up their own latrines once they got allocated land” (Carolyne Amollo, Public Health Engineer Team Leader, Uganda)

Two years later, there is a shift in the type of risks which also present health risks to the population in the settlement. There is an increase in solid waste including human waste as more household latrines continue to be constructed for the increasing population. There is also the environmental degradation that is occurring as trees are cut for fuelwood and with it, a protection risk as women and girls travel further to look for fuelwood. It is with these issues in mind that Oxfam is working, with funding from the European Union, on a project on production of briquettes from solid waste.

This action is involving local groups in the refugee settlement. One such group; Loketa’s women’s group started off as an income generating initiative and quickly morphed into a savings scheme. Oxfam is training this group of 40 women in how to make briquettes, which are essentially cooking charcoal made from solid waste.

This means that there are fewer trees being cut down for firewood and waste well used. Additionally, women and girls do not have to walk long distances in search of cooking fuel through areas where they may be at risk of violence or rape.

The women have been trained in how to make briquettes using cow dung, crop residue, sawdust, and other solid waste. The next stage will involve using human waste generated from fecal waste lagoons constructed in institutions and from household urine diversion dry toilets (UDDT). The urine diversion dry toilets have been implemented successfully by Oxfam and its partners in Ethiopia and Kenya. In the UDDTs, a slab is fixed on a toilet or latrine to separate solid waste from urine when using the facility. Users pour ash over the fecal matter to facilitate drying and destroy disease-carrying pathogens. After collection from the toilet, the residue put into a molding machine after which a series of other ‘curing’ procedures are administered before it is ready and safe to use as bio-energy, or in this case briquettes.

Oxfam has been working with organizations such as Sanergy and Sanivation who are using the same concept of containerized sanitation in informal settlements where space is limited and services to collect fecal waste are inadequate. Communities there are now making briquettes from solid waste not only for household use but also to sell in local and international markets, helping them earn a sustainable income. In refugee settlements, briquette production also provides an income generation opportunity, produces a cost-effective and safe source of energy and helps contribute to a healthy environment, reducing the risk of the spread of diseases such as cholera due to poor sanitation. This is something that the work with Loketa women’s group in the Rhino settlement in Uganda will similarly be taking forward. Working with groups such as Loketa in this project also demonstrates how integration can be implemented in Oxfam’s programmes, combining women’s economic empowerment, with protection and sanitation improvement.

“Our plan is to use these briquettes in our own homes and to sell to other households for an income that can help meet the needs of our families.” (Tabu Regina, group leader for Loketa women’s group) 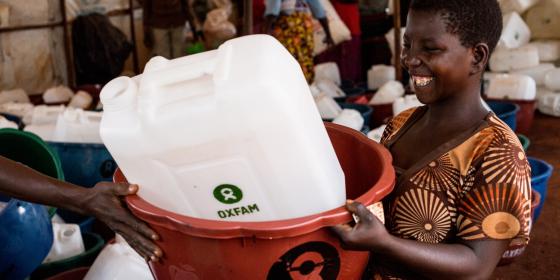 In any emergency, access to clean safe water and sanitation services is essential in enhancing people's dignity