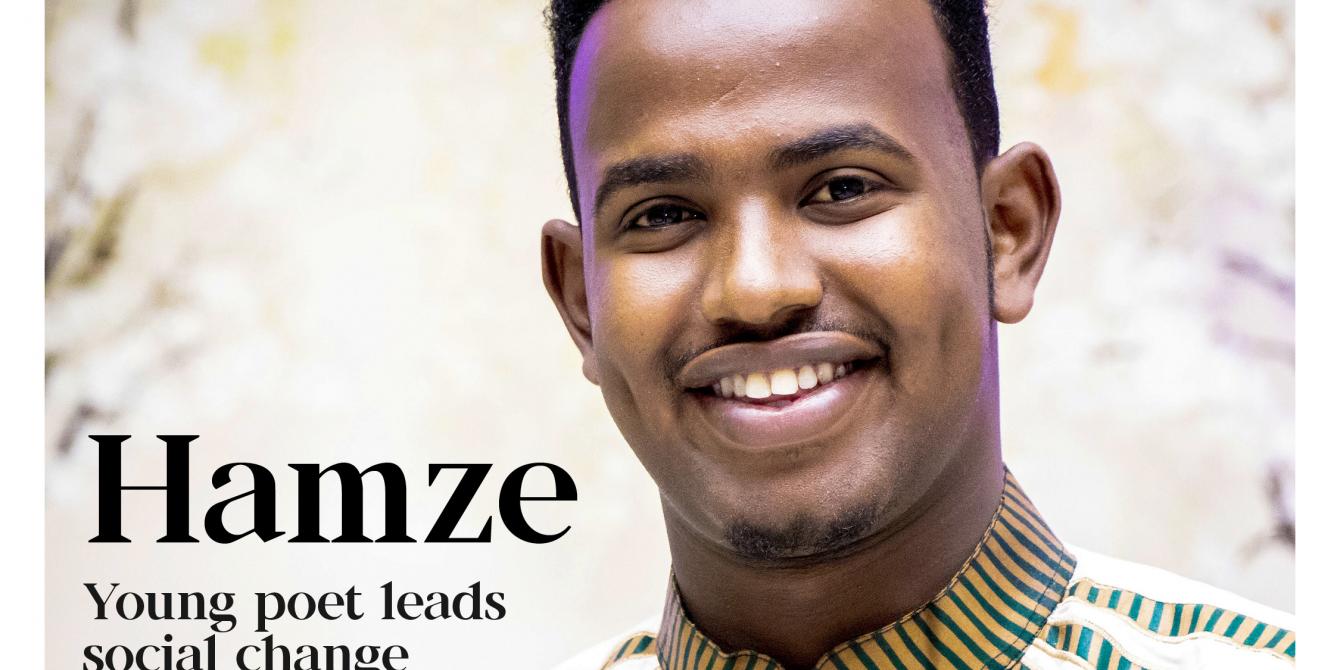 Surrounded by beautiful mountains and eye-catching scenery, Borama, a town on the Ethiopian border, is a center of learning and the home of Amoud University, the first opened in Somaliland. Presidents, politicians, business-people, and poets have graduated from this famous university – it’s the place where tomorrow's leaders are made.

Among the university’s young graduates is a 23-year-old poet, Hamze. The Work in Progress! (WiP!) program staff had a conversation with him in his hometown, Borama.  Hamze was raised by his caring parents with nine other siblings and recognizes the great start he had: “My parents are my world. I remain obedient to them,” he says.

Hamze studied Public Administration and Law but is now using his legal and social knowledge to write poetry to inspire others who may compose songs about tribalism and ‘Tahriib’ (migration). In his poem, Waayo-Dhugad (Life experience), for instance, he warned against rape:

Ruined my future in a night,

You [rapists] took my pride,

And kept my tears rolling down my cheeks.

Hamze is becoming well known for his activity. In 2014, he won second prize in a poetry competition held at Borama, and he was acknowledged as one of the most influential youth in Awdal region in 2018. His campaigning on social issues, especially his fight against rape, was finally recognized.

By word of mouth

Hamze’s dream is to motivate young people to change, by supporting their initiatives to reflect on their concerns, for instance through song. His close friends, however, were skeptical about Hamze’s social activities. They rather doubted his ability to make a difference in their social environment. "My friends believe song-writing is just a waste of time," he explained. “But I insisted on continuing no matter how much they challenged me because I believe that my people have an oral tradition, and word of mouth is so strong.”

A pioneer for change

Despite the resistance from his friends, Hamze soldiered on, writing poems and songs with little or no support from the community. He was convinced that what he was doing had value, and he showed considerable resilience by persisting with his idea. And now he is famous for his peace poems and songs, which has slowly earned him respect among his peers.

Hamze’s messages are delivered via social media (see the links below) and local television stations, which has enabled him to reach the Somali diaspora in North America and Europe.

The power of song

“Poetry is art and expression, and has been in my blood since my childhood,” says Hamze. His ambition now is to change Somaliland society through the power of songs and poetry. "If you want people to develop their country, young people are the starting point – they have the drive and stamina to pioneer changes,” he concludes.

Hamze‘s story is part of the multiyear campaign, kicked off on International Youth Day 2019 by the Empower Youth for Work program and the Work in Progress! alliance. The campaign aims to support the national influencing work of the respective programs by joining forces with local role models. The ripples of #Iwasthere are spreading out around the world and these stories are proof that change can happen anywhere – we hope they will inspire you, too, to become an active citizen.