When the locusts come 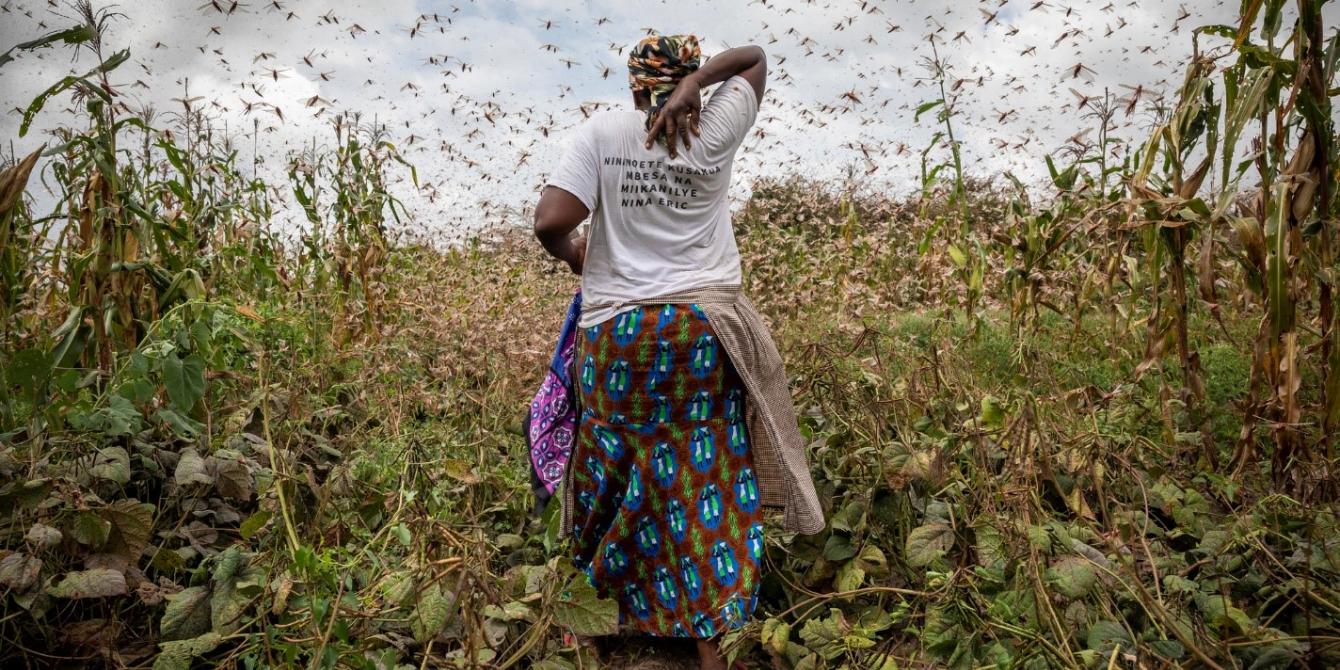 Local NGOs and community volunteers have mobilised alongside Oxfam to provide critical support to Kenyan authorities in the fight against destructive locust infestations.

In a community in northern Kenya, the scorched earth is crawling with insects. A thick carpet of locusts, numbered in their millions, have come in search of food.

Eating their body weight each day and devastating crops and pastures, when the swarm finally moves on they will leave behind land that is stripped of life.

A swarm of locusts cover a tree in a community in Marsabit county, northern Kenya. Samuel Lentorar/PACIDA 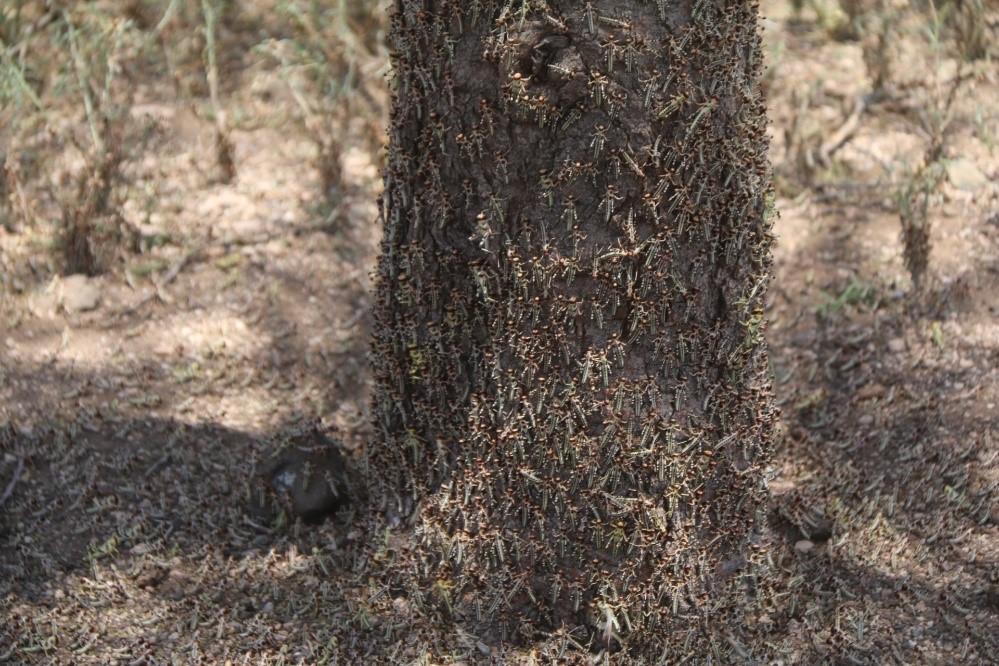 A swarm of locusts cover a tree in a community in Marsabit county, northern Kenya. Samuel Lentorar/PACIDA

“The locusts invaded … The spread was so fast. There was sounds of desperation [from farmers and pastoralists],” says Ahmed Abdi.

“There were already swarms that were really big coming into Kenya, and communities were mobilising quickly, lighting fires, making noises, whistle blowing and using orthodox methods to chase them away… But they were overwhelmed.”

In Kenya, it is the worst locust outbreak in 70 years. Farmers face the impossible choice to harvest their crops too early, before they are ravaged by the pests, or risk losing them entirely. Pastoralists and agriculturalists in the north are especially vulnerable, having just recovered from a long drought, followed by floods.

Abdi is the CEO of Oxfam partner ALDEF and the convenor of ASAL Humanitarian Network in Kenya, a group of over 30 local NGOs and community groups supported by Oxfam working together towards one goal – eradicating the locusts.

“Farmers weren’t just waiting for government action. These are their farms, and so they were taking charge. We asked what we could do to help, and community-led surveillance was born.”

Linking up with technology

Communities were on the front lines, fighting infestations in their local areas with what means they had. But in a nation where 7 out of 10 people live rurally, farmers who were utterly overwhelmed had no way to effectively communicate this to local authorities.

“Communities are the ones who know where the locusts are; government agencies can’t be everywhere,” says Abdi. Seeing a missing link, Oxfam developed a mobile app that allowed community volunteers to record data on local infestations, to be shared with government response teams.

The humanitarian network used their contacts, identifying volunteers in their communities to take part in the programme, and training them on how to use the app.

Armed with smartphones, volunteers fanned out and started logging. For every locust infestation they came across, they would input the GPS location, answer key questions about the size and stage of the swarm, take a picture, and upload.

“We download the data and hand it over to the local government’s agriculture team, who are doing controls and have teams who are trained to do the spraying,” says Abdi.

Connectivity is not an issue, he says, as the app was deliberately designed to be functional in low-signal areas. “The app is such that you can do it offline, and then you go to an online place to upload it. So you can work off the network.”

Data captured from surveillance teams is already reaping results within seven counties in the ASAL region. “Today we were able to get a plane to do spraying, so it’s leading in an actual sense to government taking action,” says Abdi.

Despite the early successes of the initiative – it’s only a month old – there are fresh challenges ahead. The twin crises of the locust outbreak and the global coronavirus pandemic threaten to create a perfect storm for some of Kenya’s poorest people.

Clean water, soap and healthcare are crucial protections that are lacking at the same time as millions live in the shadow of serious food insecurity due to the locusts and disrupted supply chains.

The virus is also hindering availability of pesticides essential to combating the infestations. “The chemicals are taking longer to come, because they can’t come by plane; they’re coming by ship,” says Abdi.

There are fears the two crises combined could have a devastating impact on communities where absolute poverty is already as high as 90%.

Meanwhile, it’s a race to beat the swarms before it is too late. Unusual weather patterns exacerbated by climate change have encouraged more desert locusts to thrive. Government control teams cannot keep up their mapping and spraying with the crisis’ growing scale and pace – swarms can measure hundreds of kilometres wide and move 150 kilometres in day.

Support from the community-led surveillance teams has been critical. “They are really happy that we’re able to help them to do their mapping, together with the community volunteers using the app, and they’re asking if it’s possible for us to do the spraying training for these volunteers to help us fight this thing at the ground level. That’s the plan,” Abdi says.

A small herd of camels, seen through a swarm of desert locusts, walks near Jijiga, in Ethiopia’s Somali Region, where the locusts travelled from into Kenya. Petterik Wiggers_Oxfam 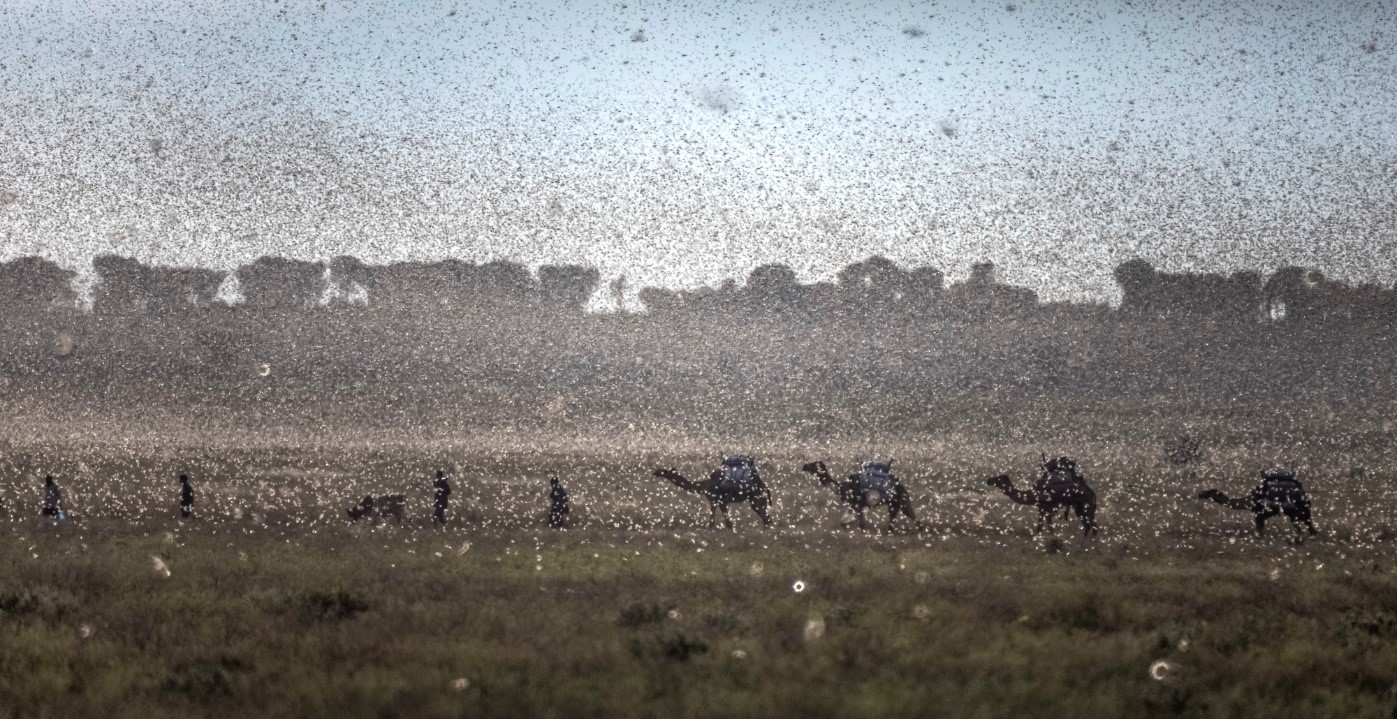 A small herd of camels, seen through a swarm of desert locusts, walks near Jijiga, in Ethiopia’s Somali Region, where the locusts travelled from into Kenya. Petterik Wiggers/Oxfam

All eyes on locusts

“Two things are very important,” says Abdi. “One is linking the information to government; secondly community volunteers can be trained to provide front-line action. From that perspective, the community-led system has been a turning point.”

Farmers and local authorities now move forward with a strong partnership in place. Working together, they continue to have an impact at the forefront of the locust response and most importantly, for the people who stand to lose the most.

“Before communities were saying, our farms are being invaded and nobody’s giving us support. Their capacity was stretched,” says Abdi. “If they’d kept quiet, and worked individually, the actions would not have been taken quickly enough. It’s bringing the support of the government at a critical time.”

Oxfam is mobilising to curb the threat to food security from locusts. Working closely with our local partner organisations, we are getting cash to many of those in greatest need so they can meet basic food needs with dignity. In Kenya, provided we can raise the funds we need, we aim to reach 100,000 vulnerable people in Arid and Semi-Arid lands.