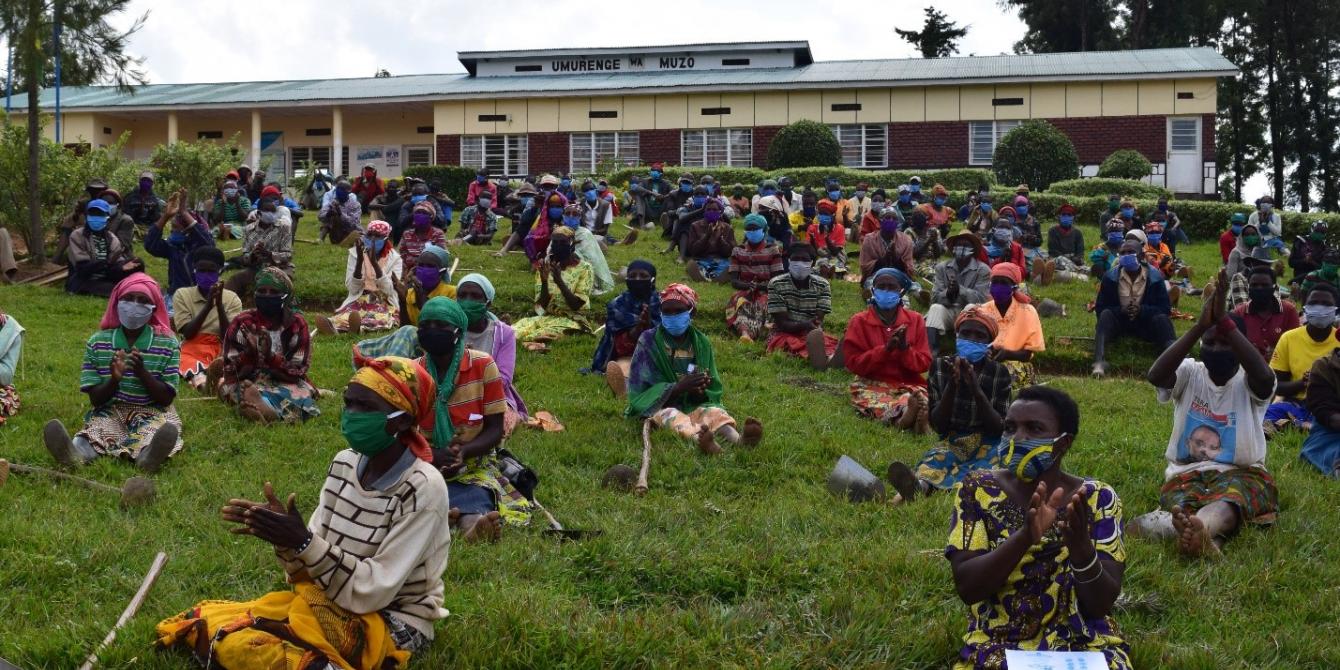 Since November 2019, floods and landslides from heavy rains have been affecting Rwanda’s Northern, Western and Southern provinces. As of early May 2020, floods caused 72 fatalities across the country, around 91 houses were destroyed and various crops were washed away. The most affected districts by floods and landslides have been Musanze, Gakenke, and Rulindo in the North; Muhanga in the South and Ngororero, Rubavu and Nyabihu in Western Province.

The initial assessment conducted by the Ministry of Emergency Management (MINEMA) and the Rwanda Red Cross Society (RRCS), showed that around 5,220 people (1,044 households) have been affected by floods.

Supported by the Start Network, Oxfam in Rwanda in collaboration with Trocaire, DUHAMIC-ADRI, and Caritas Rwanda launched a 45 days project in May 2020 to support households severely affected by floods. The project has so far supported a total of 7,430 households in the affected districts.

The Start Network has a basket fund called the “Start Fund” which enables member NGOs and their partners to respond quickly to underfunded small to medium-scale crises. Through this fund, the project targets 7,927 households in Rwanda to be reached with non-food items as immediate lifesaving support.

Louise Mukamana is a farmer and mother of 4 children. “My house was washed away. Except for the clothes I have on me, everything else was gone! I can’t explain how thankful I am for being supported immediately with these materials,” said Louise.

Louise Mukamana’s family was affected by floods in Nyanza district, she received lifesaving support from the Start Network. Photo by Laetitia Umulisa/Oxfam in Rwanda 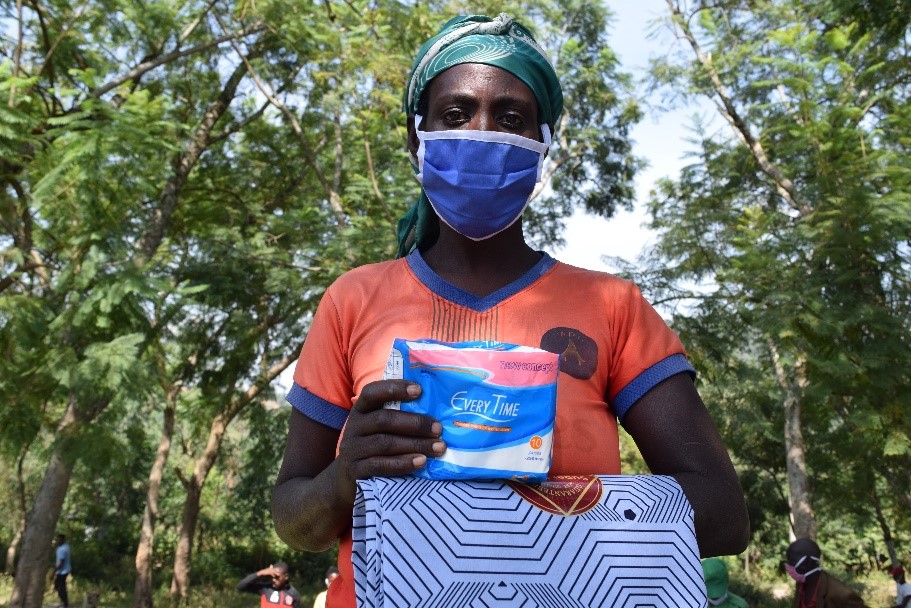 Louise Mukamana’s family was affected by floods in Nyanza district, she received lifesaving support from the Start Network. Photo by Laetitia Umulisa/Oxfam in Rwanda

With support from the Start Network, affected households, have received lifesaving materials such as basic hygiene and bed kits, kitchen sets, construction materials such as iron sheets, galvanized wires, timbers poles, among others. Households have also received COVID-19 prevention messages, face masks, soap, and water purification products to curb the spread of the virus.

Louise putting together lifesaving non-food items she received from the Start Network. Photo by Umulisa Laetitia/Oxfam in Rwanda 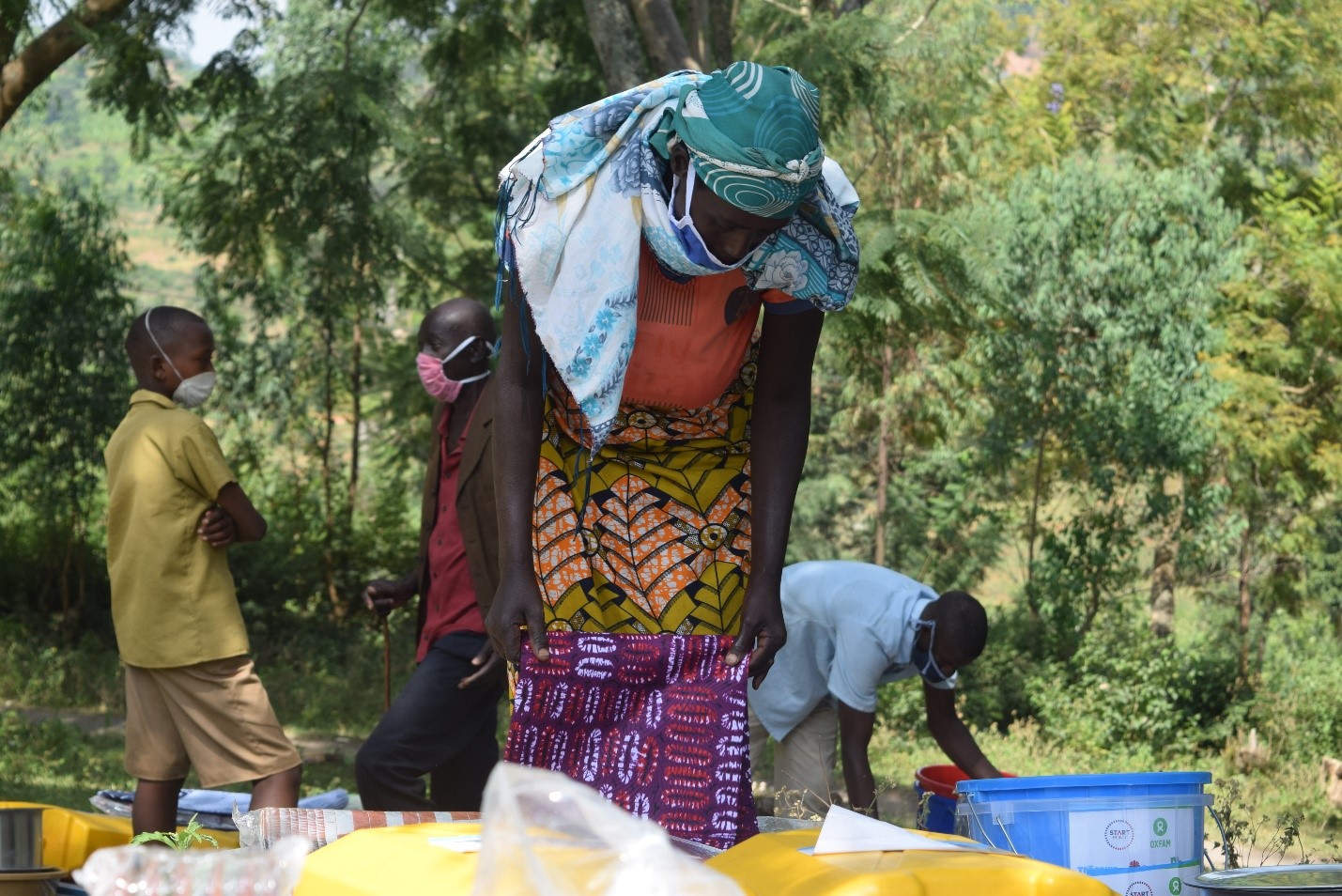 Louise putting together lifesaving non-food items she received from the Start Network. Photo by Umulisa Laetitia/Oxfam in Rwanda

Commenting on the support, Rene Christian Umukunzi, the Manager of Humanitarian Preparedness, Response and, Resilience Strengthening at Oxfam in Rwanda said: “It is a tough situation for affected households who have lost almost everything. This is the time they need us the most. We are here to provide emergency response by distributing basic lifesaving materials and collaborate with partners and the government through the Ministry in Charge of Emergency Management (MINEMA).”

According to Samuel Kamamu, in charge of disaster management in Muhanga district, heavy rains destroyed houses, floods submerged various crops, destroyed livestock, and killed 20 people. One family was swept away. He said: “The district and MINEMA have been supporting affected families with rapid needs such as food and other lifesaving kits. We appreciate the emergency intervention by Start Network. Their support is timely. It will complement our plans as a district for different disaster management interventions and help families to get the basics while looking for sustainable solutions.”

Primitiva Mukagasana, is a 46-year-old widow and a mother of five children. Together with her kids, she was hosted by a neighbour after her house was destroyed by the floods. “I was lucky my house was half destroyed, unlike my neighbours who completely lost their houses. My neighbours and I are confident that soon we will have our homes back because our government and partners have been there through it all and will still be with us towards rehabilitation,” said Mukagasana. 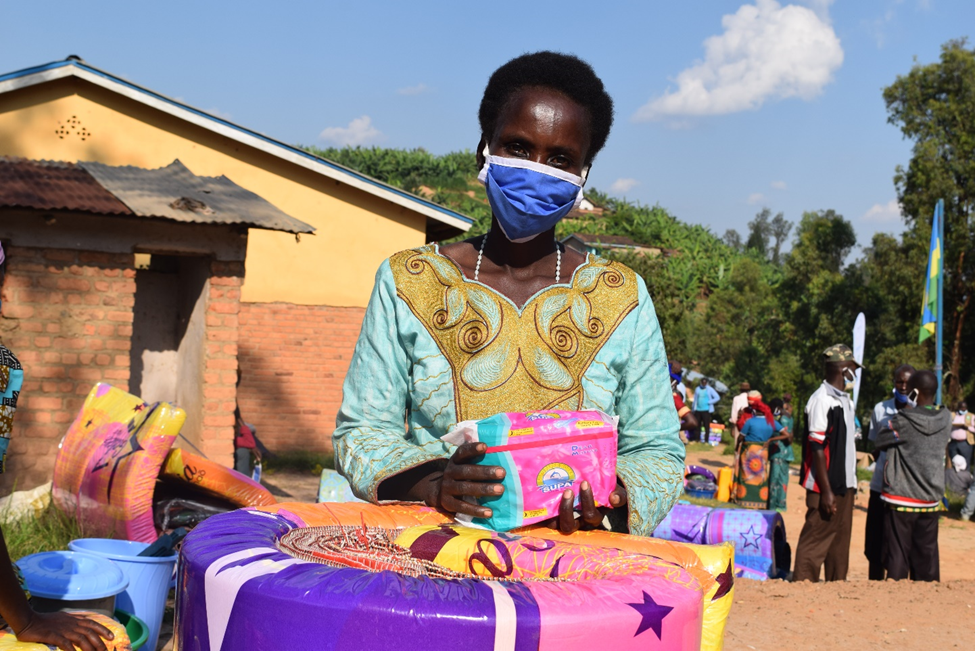 Floods and landslides have also claimed the lives of many people across the Start Fund project target districts. Emmanuel Bareba, a 28-year-old father of three children and a farmer from Gakenke district said: “The minute I heard heavy rain outside, the house had already fallen on us. My neck and legs were injured. I managed to save my wife and daughter, my other two kids aged 6 and 9 were gone.”

The most urgent thing to do for Emmanuel when he gets better is to build a resilient house in a safe area and to sensitize his neighbors to move from high-risk zones to safe areas. 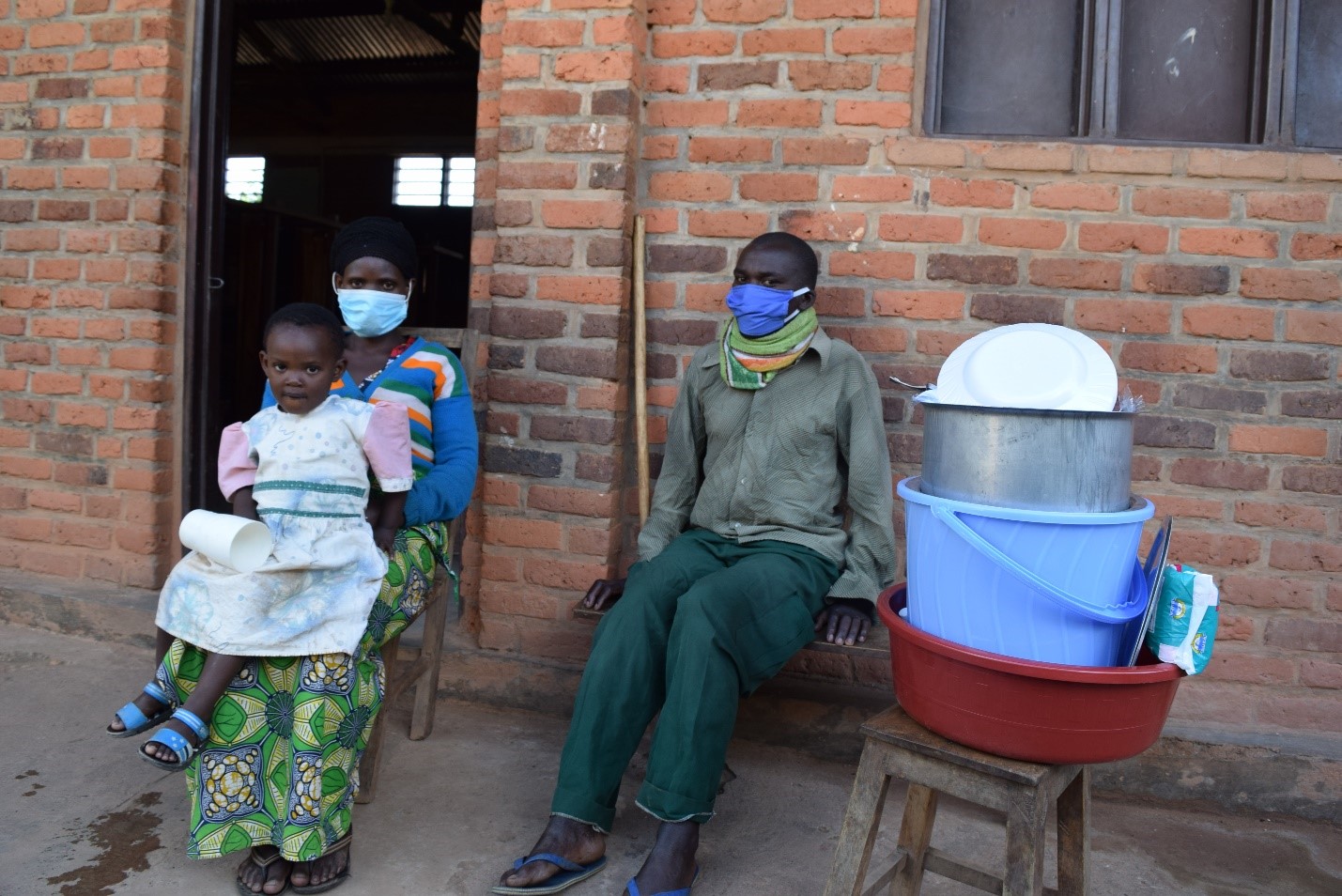 Emmanuel Bareba survived with his wife and daughter, they reside in a nearby primary school and have received immediate lifesaving support from the Start Network. Photo by Laetitia Umulisa/Oxfam in Rwanda

The flood-affected households are in a difficult situation that presents more risk for the spread of diseases such as malaria and COVID-19.

Joseph Ntegirizaza, a 62-year-old widower and farmer from Rulindo district is displaced, his house and crops were swept away. He was evacuated to a nearby school with his son and daughter. “I wish I could find a resilient house in a safer area,” said Joseph. 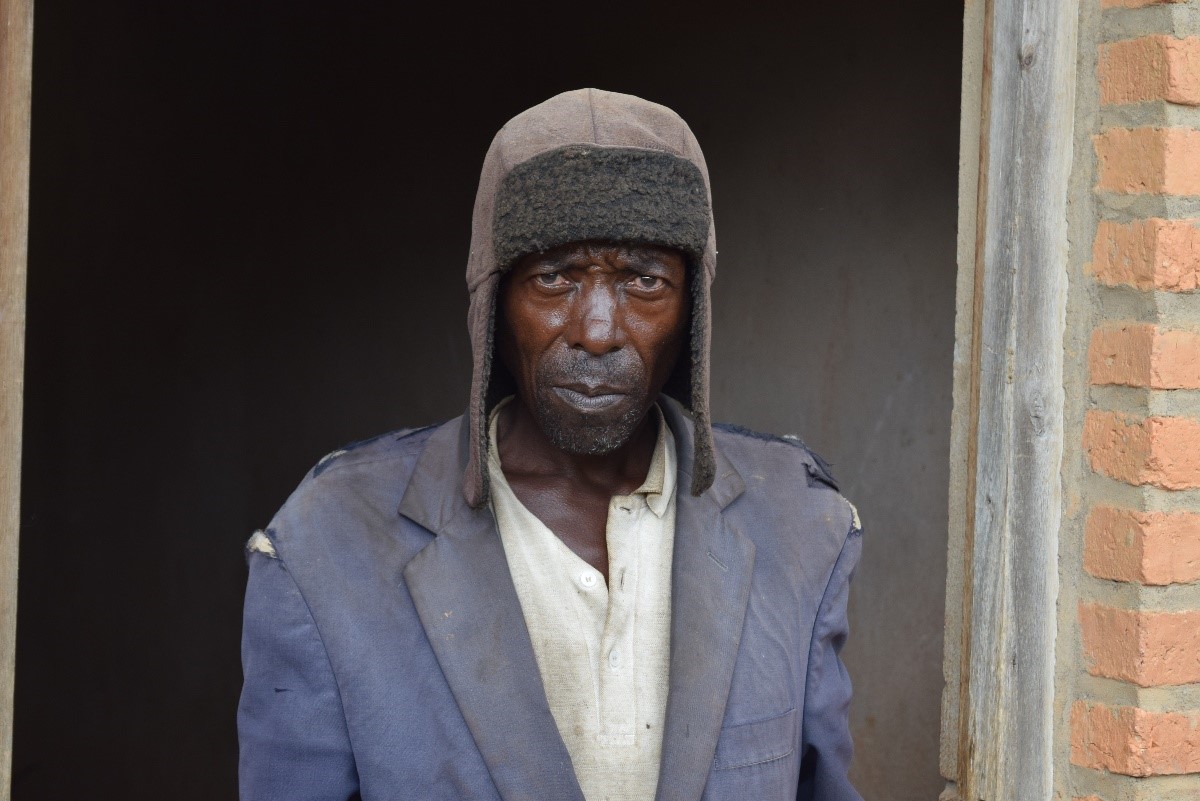 Joseph in front of his new temporary residence. Photo by Laetitia Umulisa/Oxfam in Rwanda

Most people in the Start Fund project target districts depend on casual agriculture work and subsistence farming for their survival. Due to the heavy rains and floods, people like Joseph and other affected families may lack food and their children could suffer from malnutrition. 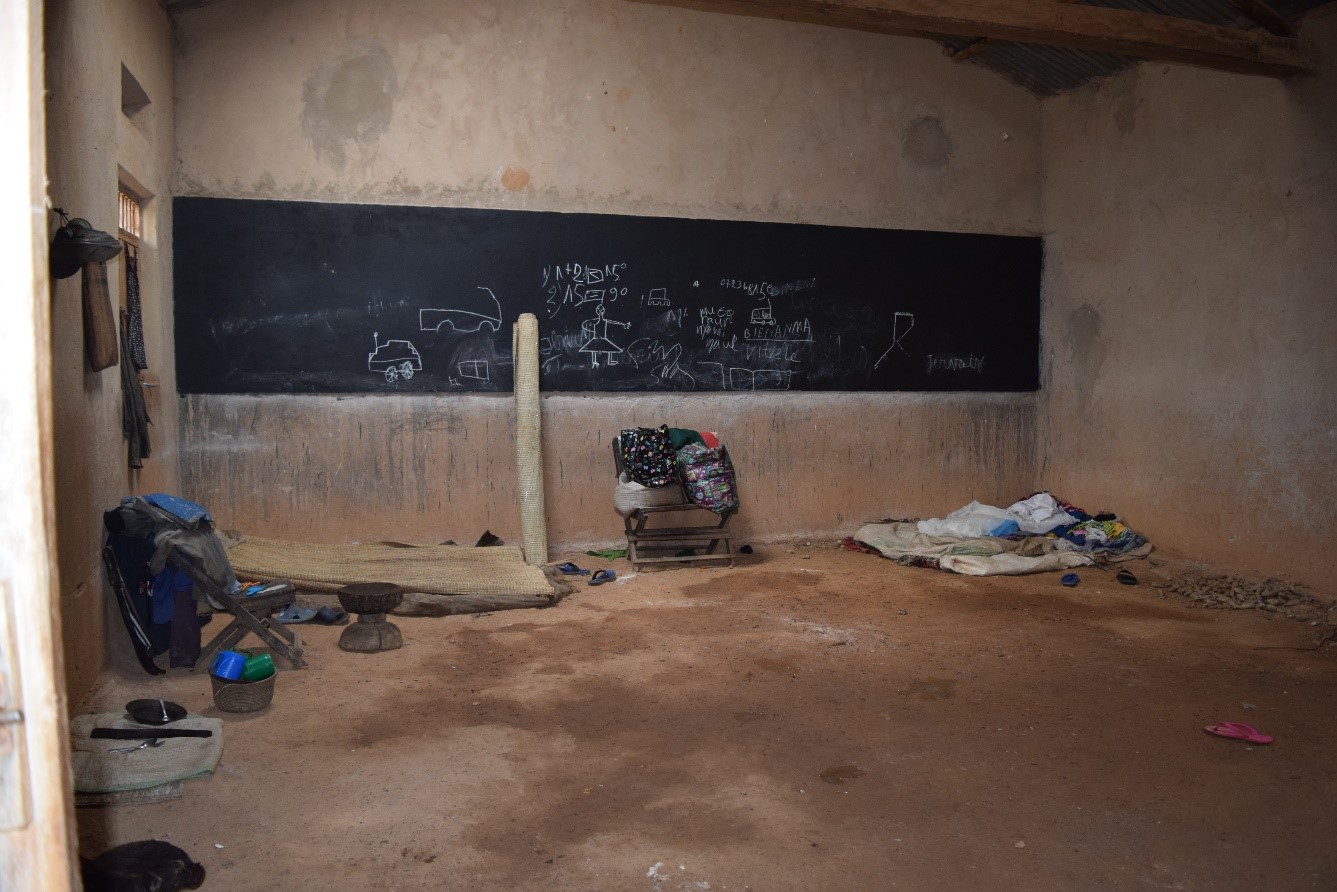 Joseph’s family stocks food and sleeps in the same classroom. Photo by Laetitia Umulisa/Oxfam in Rwanda

The most urgent support to victims of floods is evacuating them from high-risk zones and establishing a rainwater harvesting system as long-term solutions. Evacuated households need to be supported to build strong houses that are climate resilient in areas considered safe. There is a need to target households with the most vulnerable members including the elderly, children, women, and people with disabilities because of their increased vulnerability during emergencies. These groups are socially disadvantaged, their living conditions, and ability to build back better could be worsened.