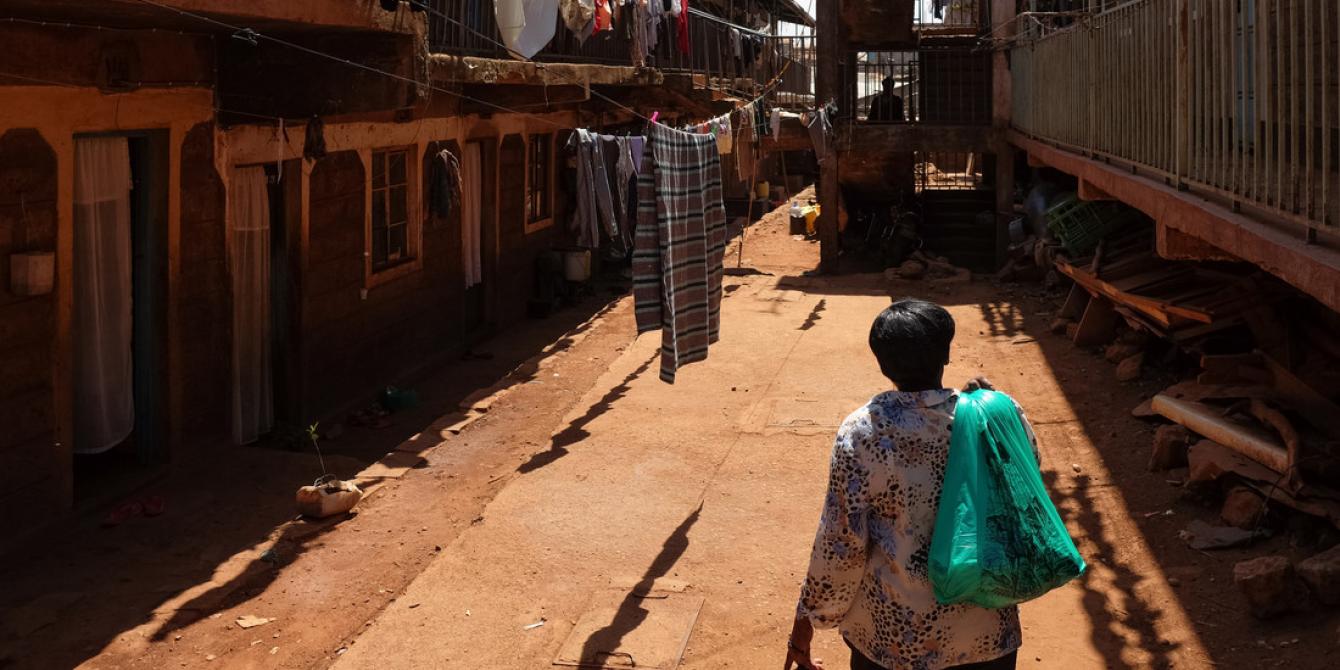 A woman returning home from work in Nairobi. Photo by Allan Gichigi/Oxfam

Lelei is employed and living a decent life in Ruaka, Kiambu County in Kenya, which is only a spitting distance from Nairobi. He woke up with a cough and a high fever. It was clear to him that these were symptoms for COVID-19. He gathered his strength and went to a health facility. He was confident that the private insurance offered by his employer was sufficient to get him the top-quality medical care that he so rightly deserved and needed.

He drove around being shuffled from hospital to hospital. Despite having lucrative private insurance, it was difficult for him to get admitted. Incidentally, it never once occurred to Lelei to drive into a public hospital to seek treatment perhaps, because of the notion that ‘public’ is synonymous with 'bad or poor' quality. Twenty-four hours later, the situation was so dire and because of sheer exhaustion and desperation, Lelei decided to camp outside the nearest hospital questioning whether, emergency medical services are a right in Kenya, or sheer exhaustion and desperation. The hospital, frantic at a patient strewn across its gates offered emergency treatment and followed it up with several calls to other hospitals until one that would admit him was found. He was spirited away to get the necessary emergency health care that eventually saved his life.

Mwanisha, a teacher employed by a prestigious private school has been playing hide and seek with her landlord because she has not been able to pay her monthly rent. She is stressed because her employer, the private school, has not paid her monthly salary since children were sent home during the onset of the pandemic in March 2020. Despite the high fees charged by the school to each student, the school had no money to keep her and her colleagues on pay just three months into the pandemic. What compounds Mwanisha’s aggravation other than knowing that she has to somehow survive for five months without a salary and eventually running out of places to hide from her landlord, is the fact that public school teachers are still being paid by the government through the teachers service commission.

These two scenarios have a common thread, both individuals chose to hinge their source of livelihood and healthcare in the private sector as is expected in a free market economy.

Arguably, what stands out here is the relative resilience of the public sector fully funded by the Government in Kenya over the private sector. COVID-19 has exposed the inefficiencies of government investment and expenditure and the undue burden placed on the private sector. The private sector’s role in these arguably essential services is one that is complementary and not necessarily core. Often, the middle class tends to cocoon within the luxuries of the private sector which compliments government services to the detriment of essential services and the malaise of government. However, when push comes to shove, government investment in these sectors is crucial because when a complimentary function supplants a core function, the eventual outcome is a failure of mandate and segmentation of the population into a tiered system of service delivery whose entry point is affordability.

The issue here is not exclusively about the role of government or private sector per se; their shortcomings or vantage points notwithstanding. It is assumed that the nexus between the two should be based on their collaboration and complementarity in development. An impasse arises when government abdicates its role to the private sector. This is often exacerbated by the apathy of the growing middle-class in Africa when it comes to participation in public decision-making processes. The middle class in Africa is set to increase exponentially in the coming decades with countries like Ethiopia projected to increase by 1200% with a similar jump of about 1230% in spending power. Although this is exceptional it demonstrates a trend in Africa of a growing Middle Class.

Research undertaken in 2019 by Oxfam Kenya on public participation in budget making processes found that middle-class women were neither aware of the budget-making process nor interested in attending public participation events. The disassociation of the Kenyan populous, specifically the middle class with the public sector is based on both a class and gender concern reflected on the reliance of the private sector for the provision of essential services. The growing middle class speaks to a growing number of individuals apathetic to the state of public services because of an increase in spending power.

Unfortunately, the poor and vulnerable bear the brunt of poor investment in essential services as there are no other options or recourse for those that cannot afford alternatives. This is the lived reality of vulnerable populations in both times of “normalcy” and emergencies as these services are far removed from the ordinary citizen. The lack or inaccessibility of essential services has cast a shadow on the vulnerability of citizens from all walks of life. COVID-19 has become an equaliser where livelihoods have come under threat, insufficiency of social safety nets have come to the fore and the unreliability of essential services has exposed everyone.

Undoubtedly, much needs to be done to reform the public sector and especially on governance and public revenue management, but the onus remains with the citizens. Active citizenship is irrevocably the duty of every individual. It should not take a pandemic to spark action from citizens, but it does take a disaster to remind citizens of the role they need to play in society.