After 10 years of independence, South Sudan working to resolve conflict and humanitarian crisis. 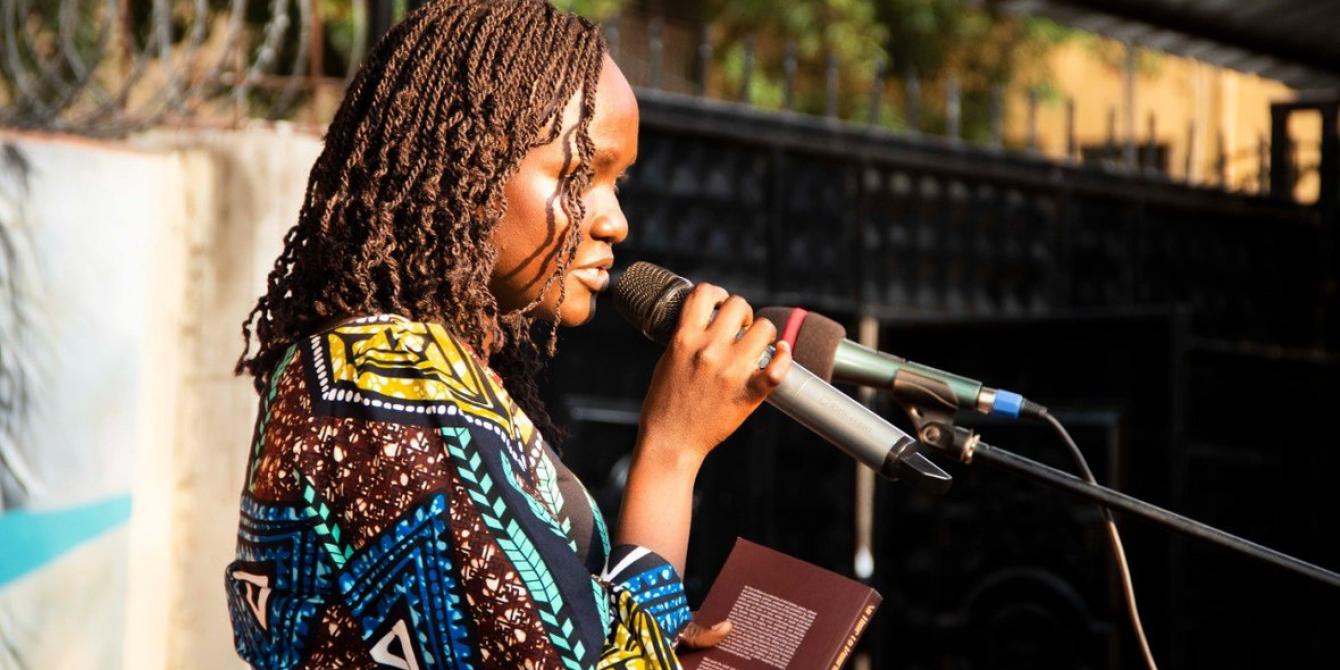 When Lydia Minagano Kape of South Sudan recites her poem “Run,” she shares with the audience a dilemma: Whether to flee from violence, possibly to another country, or to stay and hope to survive.

But there is another dilemma in the lines of the verse: “What is it that I have to run from? Death? Why would I run from death when I have died countless times already?”

Kape’s poem was published in a compendium of work by South Sudanese women artists, published this year, called No Time to Mourn. She recited it at a book launch event in Juba, South Sudan, in early July, where she and other women voiced their concerns about the ways conflict has affected them and their country, now celebrating its 10th anniversary of independence. No Time to Mourn is the outcome of a 2019 writing workshop with 18 South Sudanese women convened by FEMRITE and Oxfam.

South Sudan is one of the countries most severely affected by conflict, COVID-19, and climate change. This deadly combination has created a severe humanitarian crisis. Some areas of South Sudan are experiencing severe hunger as communities displaced by conflict are unable to grow food, and other areas are affected by widespread flooding and malnutrition. For the last 16 months South Sudan has also been affected by the coronavirus pandemic, which poses a particularly dire threat to the 1.6 million displaced people living in places where less than 40 percent of them have a convenient source of clean water.

More than two-thirds of the population of South Sudan (roughly 8.3 million people) require humanitarian assistance, an increase of 10 percent over the last year. About 7.2 million of these people are likely to face acute food insecurity through the end of July. As many as 100,000 are now experiencing severe hunger. Roughly 300,000 children are suffering from severe acute malnutrition. 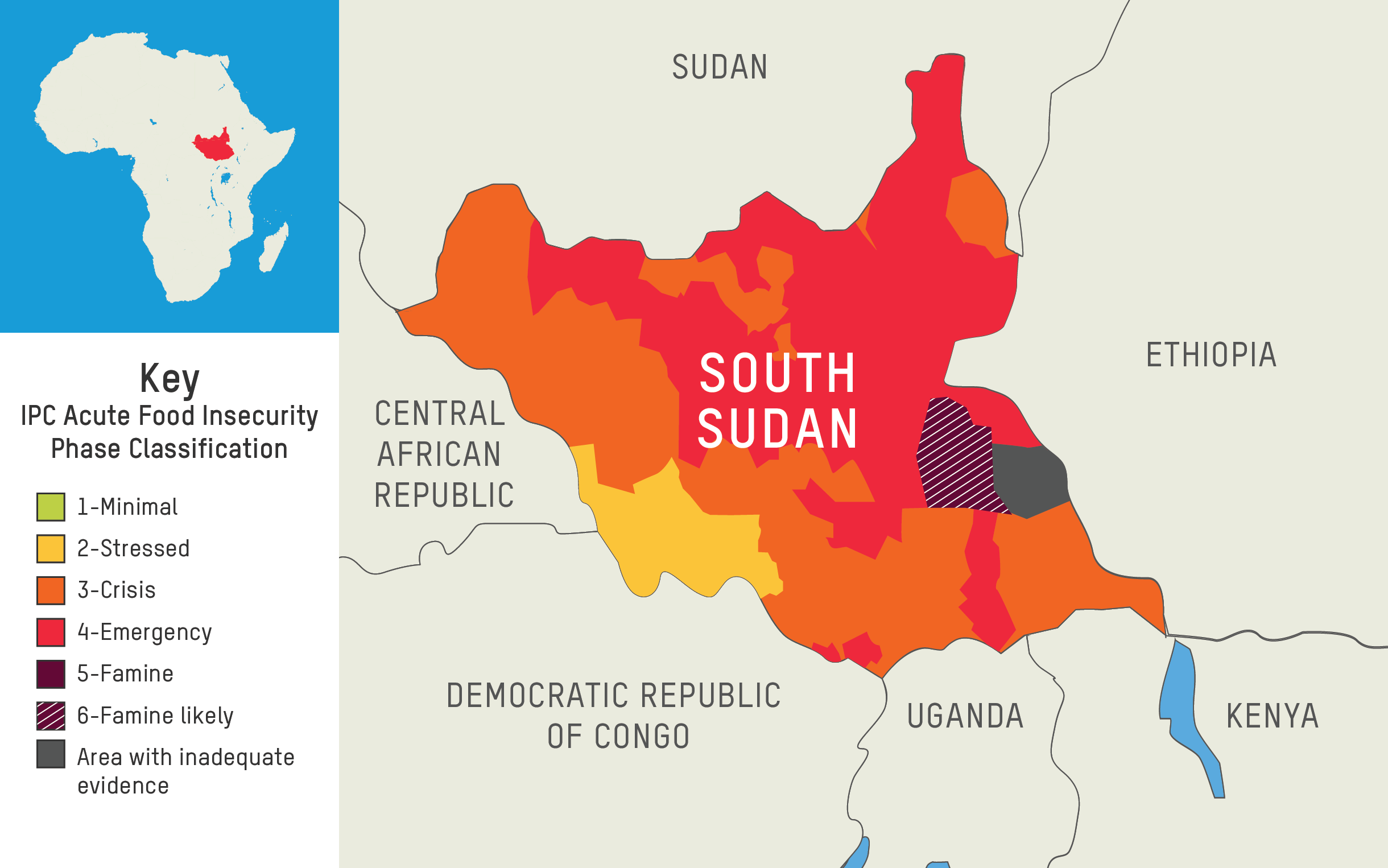 Large portions of South Sudan are at risk of severe hunger, according to the Integrated Phase Classification April-July projection. Source: ipcinfo.org

What Oxfam is doing in South Sudan

Oxfam is providing clean water and sanitation supplies and promoting public health in South Sudan. In collaboration with our partners, we are repairing wells, installing latrines, and working with the World Food Programme to distribute food or providing cash to help families meet their food needs. As of mid-July 2021, Oxfam is reaching more than 398,000 people.

Oxfam is working closely with eight South Sudanese organizations that are helping families produce their own food, supporting education, and advocating for the rights of citizens with a focus on women and girls.

In collaboration with South Sudanese civil society groups, Oxfam advocates for women's voices to be heard in the struggle to end conflict and violence in South Sudan and to promote women in political leadership positions as part of the recently revitalized peace agreement.

“Despite frustratingly slow progress, women are continuing to push for their rightful place in making the decisions at all levels to forge peace and shape the nation’s future,” says Oxfam’s Country Director in South Sudan, Adil Al-Mahi.

Susan Thomas Perambata, 40, is a peace activist from Western Equatoria state who is also advocating for women to have a larger, stronger role in the revitalized peace agreement. “When their husbands are fighting, women take care of their families, take care of the sick, farm to produce food, and carry the burdens of the community,” she says. “Because of this suffering it is important for women to be involved in the peace process. Women are good at negotiating peace, we have good qualities of patience, we can turn bad things into good. South Sudan has signed many agreements and they are always violated because few women were involved.”

Perambata, who was recently appointed to be a Member of Parliament, would like to see more women in the government of South Sudan. “It’s very important for the women of South Sudan to work side by side with male counterparts in the revitalized peace agreement for it to be effective,” she says. Under the terms of the revitalized peace agreement, 35 percent of appointed government officials are supposed to be females. Currently only one of 10 recently appointed regional governors is a woman

Finding peace and recovering from years of conflict, will not be easy for South Sudan. But as it enters its second decade of independence, Perambata and others see great potential for the country, and for women to have a more prominent role in guiding its future. “If a good number of women serve in the government at the national and state level, they will bring tremendous change,” she predicts.

You can help people in South Sudan and nearly 70 other countries to survive COVID-19 and build a better future.

The original version of this article was posted here.