Equitable access to COVID-19 vaccines in Africa: A long road ahead

No one should be blocked from getting a life-saving vaccine because of the country they live in or the amount of money in their pocket
Anna Marriott,
Oxfam

History must not repeat itself — unless everyone has access to these vaccines, no one will be safe

By Lydia Zigomo and Martin Namasaka

Africa and Africans have reason to worry. Since the outbreak, there are over 3.7 million recorded cases and over 99,000 deaths as of 17th February 2021 according to the Africa Centers for Disease Control and Prevention (Africa CDC). The optimism that Africa would be less affected, and that the world would come out of the COVID-19 era quickly with 2021 ushering in a new era has dissipated. Instead, we are now faced with the reality that there is a surge in cases, more contagious mutations, a shortage of critical care facilities in Africa that exacerbate this situation. Globally, there is a race to produce, purchase and roll out vaccines as the main solution to halt or minimise the damage from a continuous cycle of COVID infections. Thus, “vaccine nationalism” by rich nations poses new challenges for the continent in 2021. Rich nations representing only 13% of the world’s population have already hoarded more than half (51%) of the doses of several leading vaccine candidates. It’s clear that the continent is in danger of being left behind, but is the world risking a ‘moral catastrophe’ if COVID-19 shots are delayed in Africa?

Unfortunately, this has happened before. In the fight against HIV, it took seven years before antiretrovirals were widely available in poor countries. We were startlingly slow in ensuring equitable access to life-saving medicines when African countries and population groups were the site of many of the research trials for HIV. Maybe, due to weak and fragmented regulatory systems that caused delays in approvals of medicines and drugs, or we did not demand more from big pharma companies and the world at large as to the manner in which these drugs would become available and at what cost to our populations and health systems. With that in mind, will there be equitable access to COVID-19 vaccines in Africa, or will it be a ‘residual pandemic’ that kills more and more particularly of the world’s poor? Indeed, this is a stark example of the saying that no man (or in our case no country or indeed continent) is an island, and the African saying based on the concept of Ubuntu, that it takes a village… 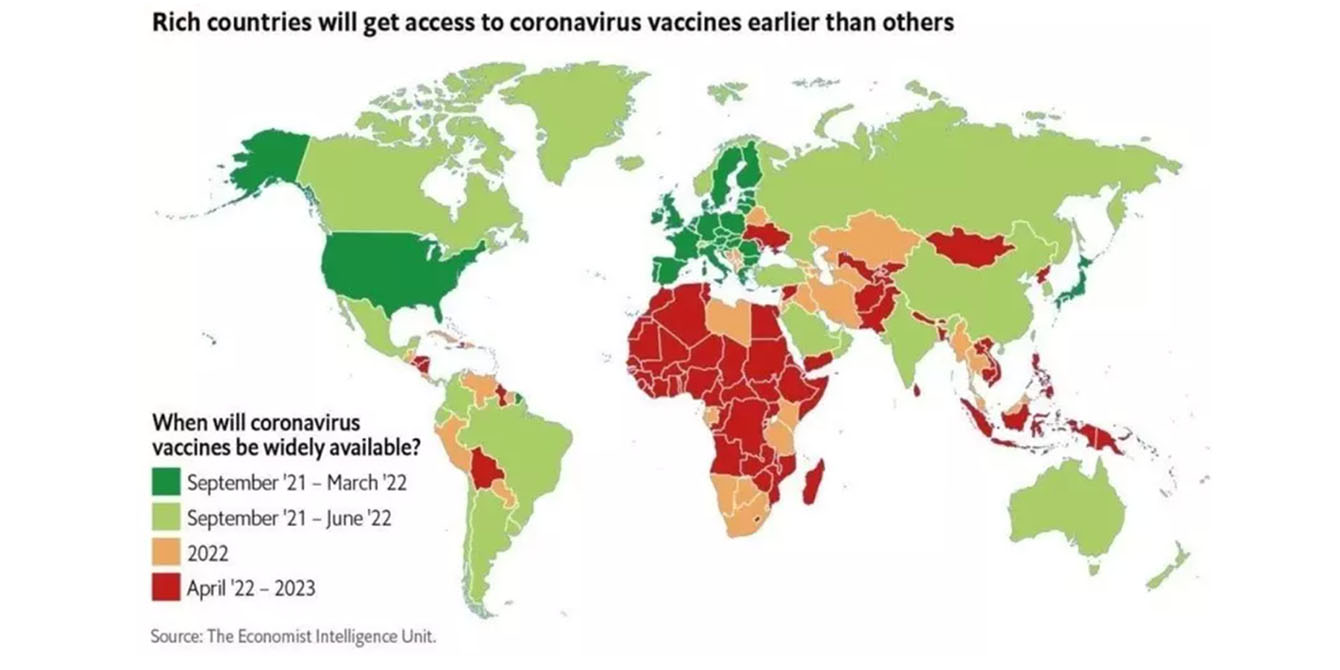 The reality is, we’re not going to get rid of the pandemic until we get rid of it everywhere. Unless everyone has access to these vaccines, then no one will be safe. While a delay in access to COVID-19 vaccines in Africa would hamstring the global COVID-19 response, the continent’s path for equitable access to the required level of vaccine is narrow as most countries could be waiting until 2024. To vaccinate 60% of its population (the estimated minimum requirement for herd immunity), Africa needs about 1.5 billion doses of vaccines, for its 1.2 billion people. Most vaccine candidates require two doses. Current estimates are that Africa will only access around 20% of the vaccines needed through the COVAX facility (a group of countries and partners pooling their vaccine procurement to strike better deals). The cost of the vaccine and building systems and structures required for delivery is estimated at between $7 billion and $10 billion, according to the Africa CDC. African nations are on average 42% ready for mass-vaccination campaigns. The desired benchmark is 80%.

The cost of COVID-19 vaccines (which have demonstrated the most efficacy) ranges from $19.50 per dose (Pfizer-BioNTech mRNA vaccine) to around $37 per dose (Moderna mRNA vaccine). This is expensive for most countries in the continent where debt has ballooned. Oxfam’s report, ‘The Inequality Virus’, shows the economic crisis resulting from the pandemic has put a major strain on external resources, with a 20% fall in remittances, a 25% fall in foreign direct investment (FDI) and trade, a fall in commodity prices and capital flight running at historic levels. The international response from the G20 nations, the Debt Service Suspension Initiative (DSSI) with bilateral creditors, has only postponed debt service payments of $5.3bn for 46 countries – which amounts to just 1.66% of the debt stock owed by LMICs (Low Middle-Income Countries). Immediate debt relief across the board is urgently needed, but the G20 is failing to deliver at the scale needed and is shying away from forcing very rich banks and investment funds to stop collecting money from poor countries. It will be a Herculean task for poor countries to buy the vaccines outright when the irony is that some of the clinical trials were carried out in Africa.

The virus has spotlighted existing inequalities of wealth, gender and race. For instance, South Sudan entered the pandemic with more vice presidents (five) than ventilators (four), and 10 countries in Africa had no ventilators at all. In sub-Saharan Africa, at least one million pregnant school-age girls risked losing their access to education at the end of COVID-induced school closures. In Italy, former deputy prime minister Matteo Salvini wrongly linked COVID-19 to African asylum seekers and called for border closures. During the first few months of the pandemic, a collapse in the stock market saw billionaires experience reductions in their wealth, but this was short-lived as, nine months later the top 1,000 billionaires, mostly white men, recovered all the wealth they had initially lost. Undoubtedly, the crisis has exposed our collective frailty and the inability of our deeply unequal economy to work for all. So, what do we do?

First, it’s long past time that we act collectively to close the vaccine access gap for African countries. Equitable access to COVID-19 vaccines is where we should start. Recently, Anna Marriott, Oxfam’s health policy Manager, said: “No one should be blocked from getting a life-saving vaccine because of the country they live in or the amount of money in their pocket.” Pharmaceutical corporations developing COVID-19 vaccines should acquiescently share their technology and intellectual property through the World Health Organization’s (WHO) COVID-19 Technology Access Pool. Failure to address the structural barriers that prevent equitable access to essential medicines and health technologies in Africa means we are likely to revisit another variant of this vaccine scramble for some time.

Second, collaboration across stakeholders, including private donors, pharmaceuticals and governments is essential to combat COVID-19, but it must be grounded in solidarity, not the advancement of geopolitical or market interests. If there is anything critical that the pandemic has shown us is the vital importance of government action to protect our health and livelihoods. We must advocate for the full participation of African governments, including those asserting that the pandemic and vaccines are a hoax, as well as civil society in decision making and ensuring transparency and accountability of all decisions when it comes to vaccine access.

Third, African countries must invest in research and development of their capacity to create the fundamental instruments (testing, manufacturing of vaccines, diagnostics, storage, training health workers and contact tracing), which are critical to guaranteeing health to their population and reducing over-dependency on other countries. The transfer of technology is critical for the manufacturing and distribution of vaccines rapidly, which could be addressed through the collective action of states. The African Union Member States should call for concrete conditions for COVID-19 vaccine research, development, manufacturing, or distribution requiring technology transfer. A relaxation of Trade-Related Aspects of Intellectual Property Rights (TRIPS) can enable African countries to access pharmaceutical ingredients as well as benefit from technology transfer, including how to manufacture vaccines at a much cheaper cost. Rapid implementation of the African Continental Free Trade Area (AfCFTA) will also help African economies to build back better post-COVID-19, strengthen regional value chains and inoculate the continent against future adverse effects of similar shocks. Linked to this must be greater transparency in information sharing about the true situation within countries, but also policy decisions national leaders are taking and the consequences of these, including addressing growing myths, as well as real and perceived fears on the efficacy of the various vaccines, such as Astra-Zeneca against the South African variant and in over 65 year olds.

Now that we are here, is a global vaccine apartheid unfolding? Unfortunately, the current response is yes. We live in a global community. The rich nations cannot protect themselves adequately if they do not understand that we are in this together. For instance, the UK and other European countries closed their borders to travellers from Southern African countries, due to the South African variant, when on the 1st February 2021 the UK admitted that, 105 cases of the South African variant had already been discovered in parts of England. Why, when travel bans were put in place? Simple, because we are a global community. Many people live and work outside their countries of nationality. They have extended families living in other parts of the world, often in the global South. The nature and future of work for many businesses, development and humanitarian activities, require movement across countries.

The point is, it’s almost impossible to prevent these variants from moving between countries and between the North and the South. After all, COVID-19’s history is of movement from China in the East to the North and the global South. Thus, just like racial apartheid hurt those who were benefiting from it just as much as those who were oppressed and marginalised by it, the same might be the case with the COVID-19 vaccine. We cannot effectively protect our interests without also finding it necessary to effectively protect the interests of the more vulnerable and marginalised. There is still an opportunity to reverse the trend towards a global vaccine apartheid. If the three actions we have listed above are prioritised, we can turn the tide and reverse the trend. However, this requires concerted and urgent action now, procrastination is not an option.

Lydia Zigomo is the Regional Director at Oxfam in Horn East and Central Africa.

Martin Namasaka is the Regional Media and Communications Advisor at Oxfam in Horn East and Central Africa.

The views expressed in this post are those of the authors and in no way reflect those of Oxfam.